Courtesy of Jamey Poelker:
On Friday at work I decided it was time to start training for the
Oregon Enduro series and called up Matt made plans to hook up and
carpool down to Oregon for some mellow Enduro training/racing.  I had
not been on the Dog River Trail so I was stoked to get down there and
rip it apart.  We arrived Saturday around 10 am registered and set up
camp in a sweet spot by the river.  Matthieu Denuelle and Greg
Satterfield met us at registration as they had been living the good
life on soft beds watching the local news in a hotel down the way.  I
am trying to get back to my roots and do some dirt bag racing this
year.  Just a bike, place to sleep, a bit of food and my Homies.

The two day race event was down to one day with two stages of racing.
Day one we shuttled the two stages getting in three laps and about 24
miles of classic Super D style riding.  The first stage was super
short and smooth and fast, kinda like a 40 yard dash for MTB's that
started off in a slippery snow/mud patch and quickly turned to dry
pine covered single track with a nasty hairpin to tree smash finish.
Times were around the 2+ minute mark.  From there riders climbed for a
couple miles up to the start of stage two.  This part was not timed so
you had a chance to catch your breath and take in the sights.  Stage
two was the real deal....  fast and challenging with a few tough rock
gardens and frustrating speed stopping hairpins that made me question
whether I could ride my stupid bike at all.  All in all I was stoked
with the course and blown away that it could be so dry with snow melt
at the start.

After the race we picked up our medals since we all made it to the
podium!!!  and went off to Post Canyon to see how the recovery process
from the ice storm was coming along.  We rode a bit there and are
happy to report that many of trails are open and ready to ride. 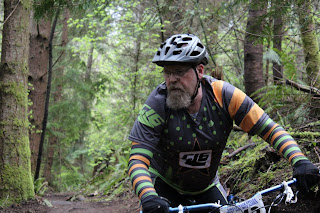 Henry's Ridge, BuDu 2012 Final.
The day started out a bit drizzly when I arrived just before the expert start. The mist let up and it actually warmed up a bit and had a sun break to two by the end of the day.
Henry's Ridge is a cool area in Maple Valley just below a housing development. Twisty single track, climbs that aren't too horrendous, fun and flowy, except near the lower pond, pretty rooty and technical in there. Overall a really nice place to ride and I'll certainly go back to explore.
Lightly attended, I only saw Henry and Erin out there with me.
Henry rode Expert Men, taking a 2nd place and 4th overall for the series.  Pretty damn good since Henry started in Sport and upgraded to Expert, losing a couple points in the process.
Erin and I raced in Sport. Unlucky for me, less than 10min into the race a bad shift Reuben-ized by derailleur. After bending the hanger and pulley arm back around I was able to finish 1 lap, only having 3 gears left usable on the cassette. I got lucky on the repairs the next day, straitening the pulley arm and replacing the hanger, seems to work well.
Erin took a 2nd place and 8th overall for the season.  I took a DNF and 16th place overall. 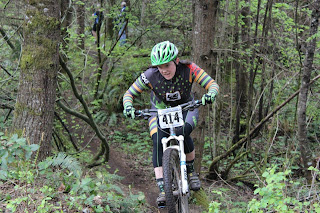 So that's my blog update. Short and sweet, now get out there and ride!

Posted by Michael Scholl at 8:18 AM No comments:

The 2012 race season has officially begun!  Well, technically, it began in January when Brian, Darin and Lito all took part in 4th Dimension Racing's winter duathalon series at nearby Ft. Steilacoom, where along with pedaling, they had to run.  Twice.  Those guys are resilient!

Because of Snowpocalypse 2012 and the ensuing trail damage, the Tapeworm Time Trial, which was such a blast last year despite the undercooked sausages was cancelled, so the first Budu race at Dash Point marked the season opener for Henry, Nancy, Mike, Lito, and myself.  Like last year, the course was fast, with some twisty sections which provided some nice flow.  Unfortunately for spectators, the slick bridge section over a mud bog was not part of this years course, so there was no entertainment to be had watching people slide off the bridge into the bog, crashing on the roots leading up to the bride, or losing shoes as they tried to hoof it through the mud.  Since I was dealing with a back injury and should have even raced that day, that course change was fine with me!  Despite my back pain, Henry and I both walked away with second place finishes.  Henry was out of first place by only twenty seconds!

I've finally decided to blow the dust off this webpage in preparation for the upcoming 2012 racing season.  Race dates are being added to the calendar as they are announced, but remember, the most important race date of the year is August 11th and 12th: THE CAPITOL FOREST CLASSIC.  I will also be updating the Men and Women of GL6 pages to include our newest members and be posting an updated roster soon.
Posted by Erin Roe at 3:09 PM 1 comment:

After its inaugural race last year, the Bend Super D is now the second race in the Oregon Super D series, which attracts riders from not just Oregon and Washington, but over the west coast.  What better way to spend the 4th of July weekend that with some Super D racing?  GL6 racers Theresa, Jamey, Matthieu, Todd and myself joined fellow Washington DHers Pete Jelinek and sons, Kathy Malvern (of Sturdy Bitch Racing) and Greg and Janine Sutterfield for three days of Bend riding and racing.

After a practice run on Friday evening and couple more on Saturday, we were ready to rock the race course Sunday morning.  The course began at the Wanoga Sno-Park, when down a connector trail to Funner, then down Storm King to the finish 8 miles later.  Though I wasn't at Hood River, I've heard a lot about it, and this course was apparently the exact opposite of the HR course; smooth, sandy trails, minimal technical sections, and lots of pedaling.  Though there was only 150 feet of elevation gain, much of the course demanded constant pedaling to keep speed, and there were several dusty, sandy corners that called up riders' best cornering skills in order to maintain momentum.  There were a few rocky sections and three or so rock drops (thankfully for me, they were all rollable) and some optional skinnies, but for the most part, the course was classic Bend; smooth, dusty, flowy.  The lack of technical features and amount of pedaling frustrated some riders, but I still thought the course was fun and flowy (which makes sense considering that this was my 2nd SD other than the CF classic) even though I was treated to a...well, less than stellar time.

Though none of us saw the podium, Todd, Jamey, and Matthieu all finished within a minute of each other (despite Jamey crashing early on), and Todd was one of two people racing the course on a hardtail single speed.  Once we were shuttled back up to the top, we were treated to beer from 10 Barrel Brewing and some delicious burritos.  Even though there was no podium or awesome raffle swag in the mix for us, it was still an excellent weekend of Bend riding and hanging out with cool people!  I'll be back in Bend for the 24 hour race in September, but I hope to return before then and continue exploring the amazing riding area. 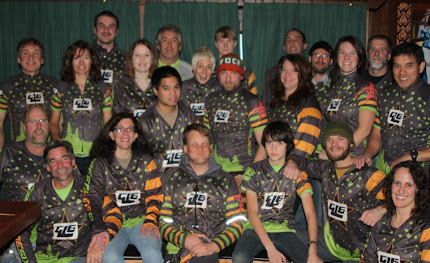 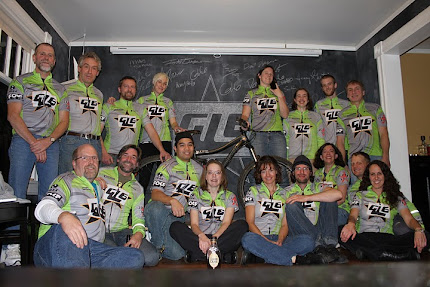 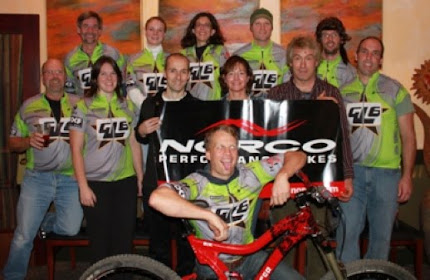